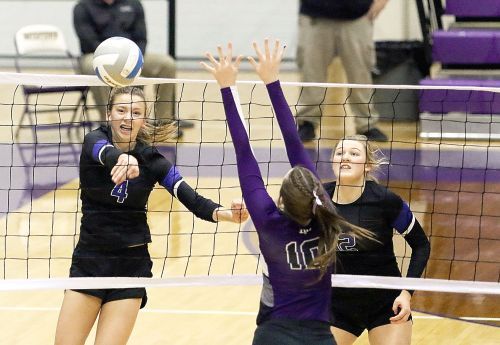 WATERTOWN — It wasn’t a matter of if Sioux Falls Christian was going to win its fourth-straight Class A title, it was a matter of when.

The Chargers came out and dominated Saturday’s championship match with Dakota Valley — taking first set 25-19 with ease and never blinked an eyelash in taking the next two sets 25-18 and 25-12 for a 3-0 match win.

“I thought the girls came out and played so hard,” Sioux Falls Christian coach Darci Wassenaar said. “They played with a lot of energy and emotion. They were really excited. It was a lot of fun.”

“I thought it was a great team effort. I thought every girl stood up and really played well,” Wassenaar said.

The title is the fourth in a row for the Chargers, who started the current run in 2017 with a win over Dakota Valley.

The Chargers met the Panthers in last year’s title match and have meet them three times in the last four years.

“Every year there’s a new group of girls and they work so hard and you are so excited for them and you want to do well and play well,” Wassenaar said. “This group is probably our tallest group — great blocking and great hitting — just all the way across. Just very balanced from everyone.”

Sioux Falls Christian won its first title in 2007, but since 2010 the Chargers have dominated Class A — winning ninth titles in 11 years. The Chargers won three-straight from 2010-12, back-to-back titles in 2014-14 and now four straight with this current run.

“We’ve just had a lot of great girls that love playing volleyball,” Wassenaar said of the current run of dominance that began in 2010.  “They love playing together. They get close and they are really focused on sharing God’s love with others and with each other and showing that to people who are watching.”

Although Saturday ended with Sioux Falls Christian celebrating, perhaps there was a bigger celebration in the air for the South Dakota High School activates Association. Following last week’s football championships in Vermillion and Saturday’s volleyball championship matches in Huron and Brookings as well as Watertown, the SDHSAA can now breathe a sigh of relief as the fall sports season ended the way it should end — with a champion crowned.

“If you would have told me at the beginning of the year we had got to this point, I don’t know if I would believe you,” Wassenaar said. “Yeah there are differences. I just really appreciate the South Dakota High School Activities Association just working to keep us playing, and our state. It was a lot of fun and it’s good for these kids.”

The Wildcats defeated Faulkton Area 3-0 in last year’s title match and have been in the Class B title match for the last five years — winning four titles in that span.