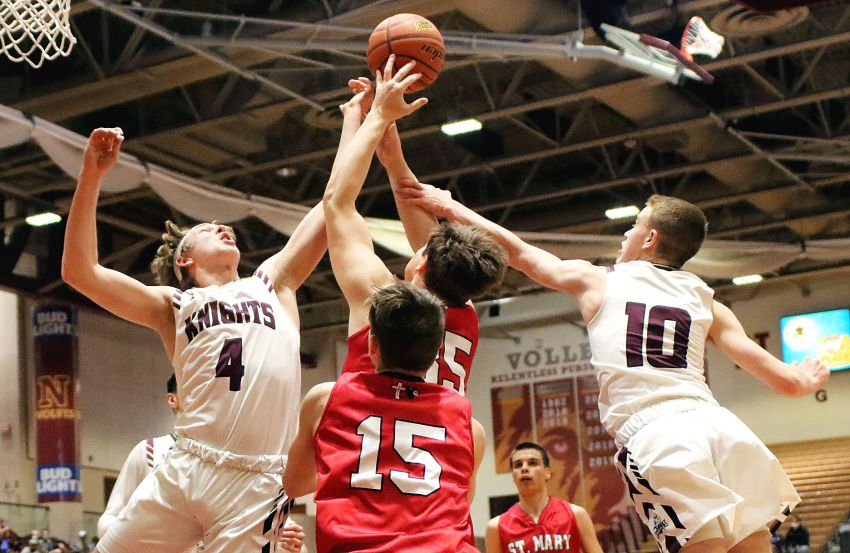 ABERDEEN — Unlike other states where the state basketball tournament is a win or go home format, South Dakota is unique in teams are guaranteed three games.

Which direction those teams go all depends upon what happens on the first day.

For Aberdeen Christian, which entered last week’s Class B boys basketball tournament with a 18-4 record and the No. 7 seed, the direction looked pretty bleak, as many expected the Knights would be playing in the dreaded consolation bracket, or as some have dubbed it the “sunshine league”

However, tell that to the Knights.

In its first-ever state tournament game played, Aberdeen Christian upset No. 2 seed Canistota 55-49 and then continued the magic the next night with a 60-53 win over sixth seed Dell Rapids St. Mary’s to advance to Saturday’s championship game.

However, it was in the championship game against top seed De Smet, where the clock finally struck midnight for this Cinderella in a 59-43 loss.

“We felt like we had a good team and we just needed to get in and we could beat anybody,” Aberdeen Christian coach David Rohrbach said. “You don’t want to end on a loss but it was a great ride. We got a lot of experience from the weekend.”

The history books will record this year’s tournament as being the second time the Knights qualified for it, but like many things, COVID has ruined over the past year, it also robbed Aberdeen Christian those magical memories.

Instead, the Knights had to wait a year to finally get a chance to see what they are made of on the state’s biggest stage, and boy did they not disappoint.

In playing in just three state tournament games ever, Aberdeen Christian found itself going from a team everyone expected to be playing in the afternoon, to a team playing in primetime with the eyes of the state on them.

“It was definitely a good experience for us. This was the first time ever playing in an actual state game after last year’s getting canceled,” Rohrbach said. “You can’t replicate playing in an actual state game. So it was a great experience. Obviously we’re really proud of how our guys responded — beating Canistota and beating Dell Rapids — both very quality teams and then playing De Smet.”

Aberdeen Christian will lose two seniors from this year’s team in Brent Ekanger and Jett Becker, but will return seven sophomores, one junior and five freshmen. Not to mention, if last year’s tournament cancellation gave the Knights motivation to return stronger, then Saturday’s disappointing loss to De Smet might add even more fuel to the fire for next year.

“Obviously the goal is to win. Every time you step on the floor your goal is to win. We just expressed how we are disappointed,” Rohrbach said of the message he gave his team in the lockeroom following the loss. “But I told them that there are so many other teams that would love to be in our position and love to be in the state championship game. At the end of the day we finished best in school history with a second place finish. There is a lot to be proud of.”

In life sometimes failure breeds success, and all the Knights had to do on Saturday is look at the team that just beat them to see that.

After falling in the 2019 Class B championship game, a game in which De Smet coach Jeff Gruenhagen described as “heartbreaking,” the Bulldogs finally got their chance at redemption and finally tasted the glory of being a state champion.

“Our guys are gym rats. The goal is to be back,” Rohrbach said. “We lose two good seniors but luckily we only lose two seniors. We bring a lot of talented sophomores back. A lot of guys that have good experience and they will put the time have the experience to know what it takes to get here and work a little harder.”