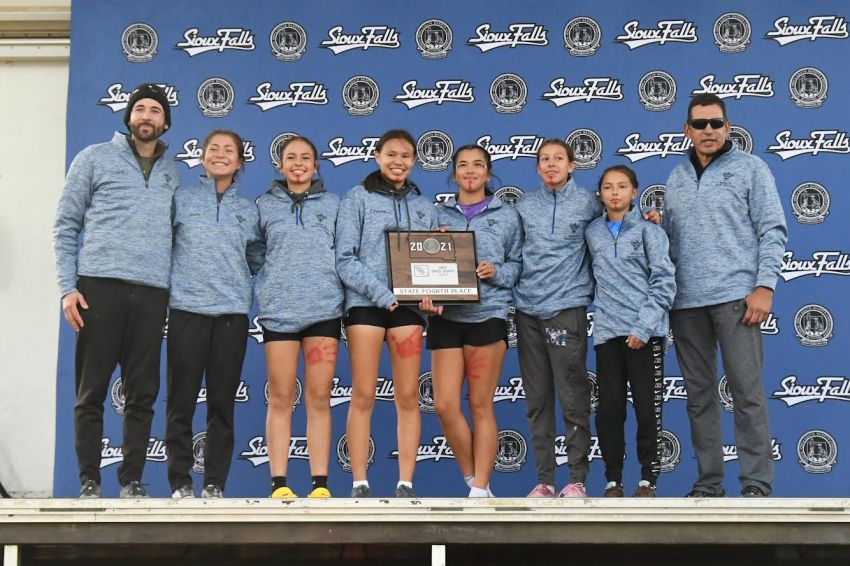 Three years ago when the Red Cloud girls qualified for state, coach Russ Cournoyer talked to his young team about the day they would bring home hardware from the state meet. In 2019, the Red Cloud girls earned a 10th place finish. Last season, the girls moved up to eighth place.

“We've been talking about it as coaches but the bar has been set,” Cournoyer said. “These girls have developed a culture and we're hoping that potential athletes will commit to this sport and want to be part of that team.”

“Ashlan and Jade ended up being a couple seconds apart,” Cournoyer said. “They both ran personal bests that day and that really helped our team in the end.”

Both Red Cloud runners finished in front of defending state champ Abby Cutler (Hill City) who dominated action in the Region 5A meet.

Cournoyer's daughter, Rarity, has been coming to state cross-country meets for a long time. That may have helped the seventh grader, who finished 38th in the biggest meet of her life.

“Rarity has been tagging along with me to the state meet since she was three years old,” Cournoyer said. “I think she was aiming for a top-25 finish and felt bad about not reaching the podium but got over it quickly when she found out the team got fourth.”

Prior to the state meet the Red Cloud girls did a special honoring for Cheree Ferguson, the only senior on the team.

“We did this big poster and I and all the girls signed it,” Cournoyer said. “We wanted to take a little moment to thank her for all the good years she's given this program.”

On Saturday, Ferguson crossed the line in 56th place. Her effort was the final scoring position for Red Cloud and helped the Crusaders edge defending state champion Hill City by three points in the team race.

For all of the individual aspects of cross-country the team portion of the competition brings athletes together like no other sport.

“After we finished second in the region I heard Jade say this was her best cross-country year ever because of the team awards,” Cournoyer said.

TD Circus Catch by the Knights