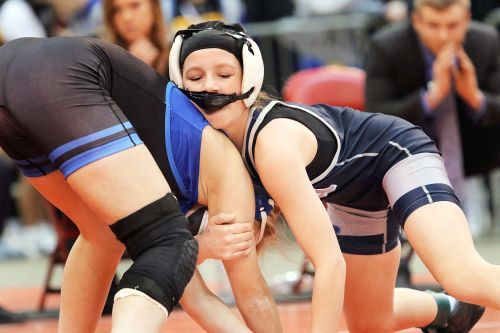 Bon Homme/Scotland/Avon’s Brittany Rieb tires to get a grip on Mount Vernon/Plankinton/Corsica-Stickney’s Alexis Hauge during the Class B girls 112 final Saturday in Rapid City. Rieb won the match with a 8-0 decision to become the first ever girls st
Photo by Rodney Haas

Rieb was one of 88 girl wrestlers to compete in both the A and B tournaments this past weekend at the Rushmore Plaza Civic Center. Overall, there were 150 individuals that participated in girls wrestling in its first year as a sanctioned sport.

Rieb said there were two girls on her team this year and added in practice they would wrestle with the boys.

“I think practicing with the boys is 100 percent better. It makes us stronger in a lot of ways,” she said. “Our coaches take us places where we can wrestle where there’s girls divisions. Sometimes at the beginning of the seasons we will have duals and we have exhibitions and stuff.”

Rieb said she got into the sport because her brothers were wrestlers. She added she used to participate in gymnastics, but she didn’t really like it.

“Wrestling got me a lot stronger and I got to work harder for the things that I need to work on,” Rieb said. “It’s just such a great experience to have.”

By winning her first state champion as a seventh grader, Rieb is also on track to do something that has only been done twice in Class B — become a six-time state champion. It’s a tall task yes, but one that would only add to her legacy as an early pioneer in girls wrestling and set her place in the history of female athletes in South Dakota.

“I’m really proud that I got this experience and I’m really glade that I had the year I had and I’m able to wrestle varsity,” Rieb said.