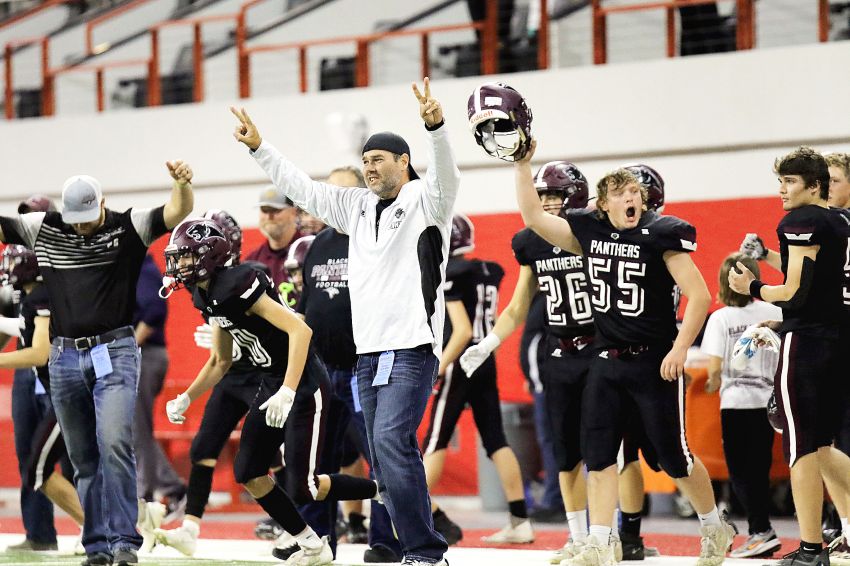 State champion finalists -- Platte-Geddes and Canistota/Freeman -- combined for nine all-staters on the Class 9AA all-state team, which was selected by the South Dakota Football Coaches Association.

Canistota/Freeman’s Will Ortman, Trace Ortman, Riley Heiberger and Noah Kleinsasser were selected for the Pride.

“Dylan rewrote the Garretson single-season record book this year breaking five records along with establishing the career passing record for the Blue Dragons,” Garretson coach Chris Long said. Dylan is a three-year starter and developed into a dual-threat quarterback this season. He accounted for 35 touchdowns for a team that averaged 31 points per game.”

“Brock is an outstanding lead blocker,” Hanson coach Jim Haskamp said. “As a runner, he has excellent vision and patience. He is a go-to person when in short yardage situations as he is very difficult to bring down with just one defender.”

“Jayce plays much bigger than he is,” Timber Lake coach Ryan Gimbel said. “He is an elite blocker, willing to block and lead for his team. Huge heart and hard worker.”

“Isiah is tough,” Canistota/Freeman coach James Strange said. “He has great leg drive and the ability to run inside and out. He gets great separation from defenders and was the primary focus of our offense. He doesn't drop passes thrown his way and gets great yards after catch.”

“Ashton has been a workhorse for us the past two seasons,” Florence-Henry coach Travis Schmidt said. “He earned all-state honors last season and did not disappoint this season by putting together another solid season. A lot of defenses had to make him a huge part of their game plan if they wanted to stop our offense and not too many were very successful at stopping him.”

“Cooper has evolved into a receiver that is able to threaten the entire field,” Garretson coach Chris Long said. “Long spent a majority of the season leading South Dakota in receiving and has been a three-year starter for the Blue Dragons. Garretson's spread offense allowed Long to showcase his skills.”

“Will is a tremendous athlete with a great ability to go get it,” Canistota/Freeman coach James Strange said. “He high points the ball and adjusts tremendously to be successful.”

Foxley was slowed by injuries his senior season, but returned in time to play in the state championship game against Canistota/Freeman.

“He is a two-time all-state player for us and has suffered through a couple weird injuries this year,” Platte-Geddes coach Bruce Hanson said. “He was dominant vs Chester in the playoffs until he got injured midway through the third quarter. He is the real deal when healthy and a major part in what we do on both sides of the ball.”

Ortman anchored another productive Canistota/Freeman offensive attack. The Pride averaged 32 points per game and racked up 3,364 yards of total offense.

Finney helped the Black Panthers rack up 2,220 rushing yards and 1,100 passing yards. He was an all-state lineman last season and is a two-time all-conference performer.

“He’s our leader there and makes a lot of the line calls,” Platte-Geddes coach Bruce Hanson said. “He has had numerous pancake blocks and is our main pulling guard. 2X all conference.”

Geditz was an imposing lineman for the Tigers up front. He helped Ipswich rush for 2,024 rushing yards and 37 touchdowns, while passing for 1,139 yards and 11 touchdowns. He was an all-state defensive lineman in 2020, a two-time all-conference selection and a four-time letterwinner.

“Zach is a long athletic hard working player for us,” Ipswich coach Brian Hogie said. “We would spend a lot of time running behind him or pulling him. He has been a staple of our OL since his freshman year.”

“Michael is a player who knows how to turn on the switch,” Hamlin coach Jeff Sheehan said. “He has a high motor and will do whatever he can to help his team win. He knows how to use his body to position himself correctly to create running lanes. He is a hard worker and a great all around person.”

“One of the best linemen I've coached,” Lyman coach Mike Kieffer said. “Strong, athletic and smart. Pulled a ton and great out in space.”

Collins capped off a productive season for Lyman, finishing with 1,874 rushing yards on 213 carries and 24 touchdowns. He logged 3,208 rushing yards and 44 touchdowns on 386 carries in his career. He was an all-state running back in 2020 and two-time all-conference performer, along with the conference MVP.

“Jovi is a young explosive athlete whose numbers are slightly down from last year as most teams we played accounted for him with safety help as he saw very little single coverage,” Chester Area coach Ken Prorok said. “However, he still managed over 21 yards per reception this season. Jovi is a great and kind young man.”

“Riley is a big man that can move,” Canistota/Freeman coach James Strang said. “Slimmed down his senior year and can run side to side. Quick hands, good feet, trails and hips well when the ball goes away and blows up front side doubles.”

“Tell is a workhorse,” Lemmon/McIntosh coach Josh Anderson said. “Most teams this year just flat out didn't run at him. He continually gets to the play and is always around the ball.”

“Chase was a dominant force on the defensive line,” Florence/Henry coach Travis Schmidt said. “Many times offenses would run away from him so we had to play him at all spots to keep the offense guessing. A lot of offenses would come to the line and call the play there to run away from Chase.”

“High motor guy, weight room warrior, and the epitome of a team player,” Viborg-Hurley coach Rob Kessler said. “Conner is a four-year starter that has been on our Cougar Unity council for all four years. He has had a great career at Viborg-Hurley and we wish him all the best with his decisions for the future.”

Grayson Hanson capped off a productive career for the Black Panthers, who won the last two Class 9AA state championships. Defensively, he had 143 tackles (13 tackles for loss), 11 forced fumbles and one interception. On offense, he logged 1,268 rushing yards and 18 touchdowns on 198 carries. For his career, he racked up 413 tackles (222 solo), 54 tackles for loss, 17 forced fumbles, seven interceptions and six forced fumbles. Offensively, he had 364 carries for 2,384 rushing yards and 35 touchdowns. He also had 41 receptions for 634 yards and six touchdown receptions, while passing for nine more touchdowns.

“Grayson is our best and smartest player on the field,” Platte-Geddes coach Bruce Hanson said. “He leads our defense and we let him make most of the calls based on scouting reports so we put a lot on him in the game. He is like a coach on the field and is scary good at finding things on film and translates that to the field.”

Kleinsasser was a force in the middle of the Pride’s defense. He posted 69 tackles (60 solo stops), 13 tackles for loss, five pass breakups, two sacks, two fumble recoveries, one forced fumble and one interception. For his career, he had 100.5 tackles and was the program’s most improved player in 2020.

“Noah is our leading tackler, film junkie and ball hawk,” Canistota/Freeman coach James Strange said. “Noah does an excellent job reading from the Will backer spot, getting a drop and making tackles in space. Never misses practice, plays banged up and we wouldn't have made it in the playoffs without him.”

Peterson posted 89 tackles and one forced fumble for the Tigers. He added four rushing touchdowns and 234 rushing yards on 52 carries on offense. He was an all-state linebacker in 2020 and Ipswich’s two-time defensive MVP.

“Hard nose LB who runs our defense,” Ipswich coach Brian Hogie said. “Did a great job of getting everyone lined up and in position throughout the season.”

“Ryan is an explosive athlete who never came off the field for us,” Chester Area coach Ken Prorok said. “He has very good ball skills and has been a two-year captain for us. He is an excellent young man who excels both on the field and in the classroom.”

A three-year starter, Crownover posted 73 tackles and three fumble recoveries this season. For his career, he has 172 tackles (142 solo) and four fumble recoveries. He has 1,950 all-purpose yards and has been Bon Homme’s leading tackler the past two seasons.

“Isaac is a very good team leader both on  the field and off the field,” Bon Homme coach Byron Pudwill said. “Crownover was a workhorse for our team and he never came off the field. He is a throwback to the old school way of playing football.”

“Jackson was 9AA all-state running back last year and we have limited him this year due to a couple injuries so that we try to limit the hits on him to keep him for defense,” Platte-Geddes coach Bruce Hanson said. “He has been our kick returner and punt returner for the past four years and a three-year starter on both sides.”

Olsen logged 17 touchbacks, finished 3 of 5 on field goals and 13 of 15 on extra points. He nailed a 46-yard field goal this season.

“He has been our nose tackle for the past three seasons and trust him to hold his own in our 3 man line,” Platte-Geddes coach Bruce Hanson said. “Defensively our team has allowed under 12 points per game the past two seasons.”

VanHolland hit 35 of 38 field goal attempts this season and hit a game-winning PAT against Viborg-Hurley in her first-ever football game.

“Jenna took a chance at joining the GHS football team as a kicker just five days before their first game,” Garretson coach Chris Long said. “It was clear immediately that she had a talent that would help the Blue Dragons immediately. Jenna split her time between the soccer and football teams for most of the season. Jenna made an immediate positive impact on her teammates through her willingness to take on a challenge and her positive and engaging personality.”