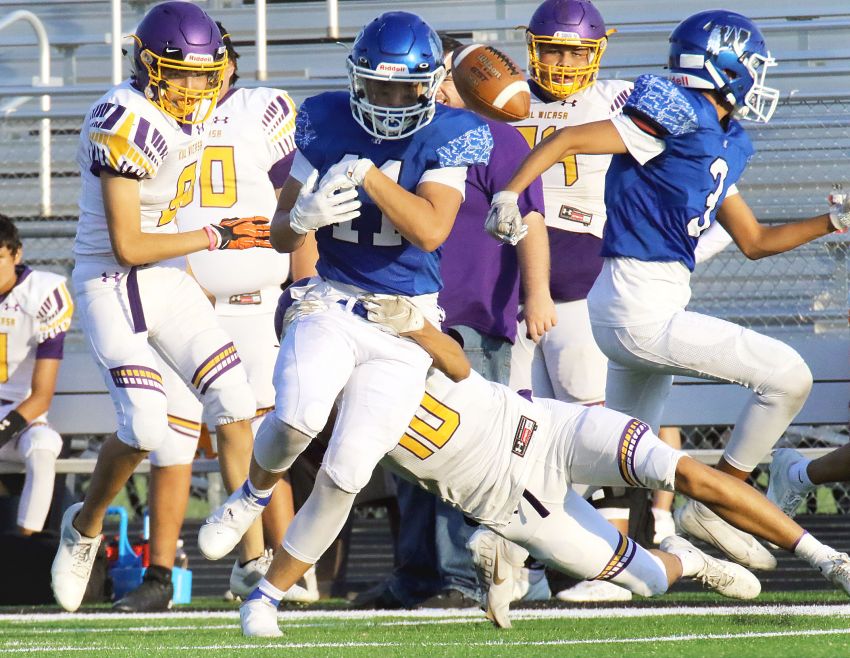 AHEAD OF THE GAME

MITCHELL --- When the final second ticks away during Thursday’s All Nations championship game, the scoreboard at Mitchell’s Joe Quintal Field will read just one winner.

But when it comes who wins in preparation for the upcoming fall season of the All-Nations football conference, both Tiospa Zina and Winnebago along with the five other teams who participated in this spring season will already have a leg up on the rest of the teams who did not participate.

After starting the conference in 2019 with 12 teams, the All-Nations Football Conference was looking forward to beginning its second season last fall, but like everything else, COVID wiped it out.

Instead, the league decided to play in the spring with Cheyenne Eagle Butte, Lower Brule, Marty, McLaughlin and UmoHo Nation joining Tiospa Zina and Winnebago this spring.

“It’s been challenging,” Winnebago coach Adam James said following his teams’ win over Lower Brule in last week’s semifinals. “The spring we are usually doing track and golf, so it was difficult to get them into the football state of mind. But they bought into it and they came ready to play.”

James said the keys to having the short turnaround before fall practice starts back up in August is eliminating injuries in the spring and making sure everyone is healthy. He added that since the Indians have been playing in the spring, the only thing the offseason will consist of is hitting the weight room and conditioning.

“Our kids already know the plays,” James said. “The seven teams that played this spring are going to be way ahead of those other 10 teams that are coming into the league. They haven’t been playing football for close to two years.”

Under a normal spring, Peters said his team would be doing some camps here and there or maybe have the captains have practice or go to a 9-man football camp.

“Other than that, we don’t really have any type of organized football,” Peters said of a normal spring. “We’ve never had this much ball at all. Not even close. In the last two quarters (of last week’s semifinal) that was a lot of our younger guys playing so were getting them ready for the fall. I think we’re real blessed to play this spring.”

With the success the All-Nations Football Conference has had with its spring schedule, some might say why not move it to the spring permanently? After all, by playing in the spring, then the league would have the football stage all to itself and not have to share it with the rest of the state.

But James is not a fan of that prospect.

“I know we have talked about that and weighed the options but in Nebraska we can’t dual-sport so that benefits the South Dakota teams,” he said. “Going back in the fall with all 18 teams will be ready to go but if you were to put it in the spring, some people will drop out. I think fall is football. The spring was already an adjustment, but I think fall is the way to go.”