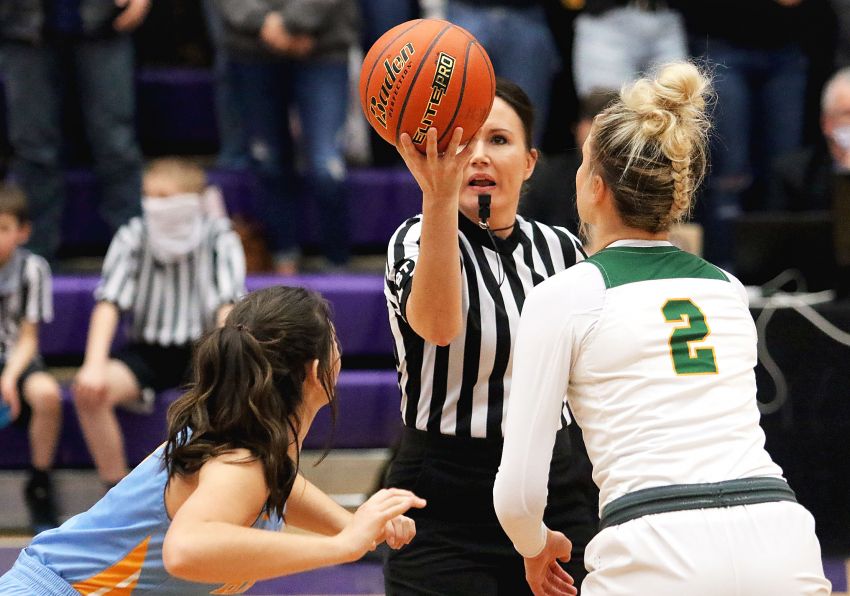 WATERTOWN — Genevieve DeMent-Osborn recalls early in her officiating career how she would have to change in the lobby bathroom at the gym where she would be working that nights game.

“At the end of the day we all wear stripes but it’s different to have to find a boiler room to change,” DeMent-Osborn said. “Because a lot of those smaller schools don’t have the facilities that they do here (at the Watertown Civic Arena).”

According to DeMent-Osborn, she is just one of three female basketball officials certified to work state tournament games, and earlier this month she became the first Native American woman in South Dakota to be the head official for a basketball championship game.

“It’s humbling,” she said of the chance to work the girls Class A championship game. “Because it’s very difficult to be the only female in a male dominated arena, especially in South Dakota.”

Being a female has had its share of challenges for DeMent-Osborn, more than simply finding a place to change. In some cases, she has had to deal with the sexism of the old guard not wanting to relinquish to change, and instances of having unwanted advances including a time where she said she thought she was violated and trapped.

“It’s uncharted territory,” she said. “I don’t think my peers know how to react to a female official. Because you are not one of the guys, but you are doing guys stuff.”

Despite these challenges, DeMent-Osborn’s work ethic and dedication has earned the respect from her fellow officials including long time official David Rodgers or Spearfish, who has become a mentor for her.

“There’s probably an uneasiness because of the unfamiliarity. Some people will error on the side of sexism and others will error on the other side walk around with kid gloves,” said Rodgers, who worked along side DeMent-Osborn during the Class A championship game between Aberdeen Roncalli and Hamlin. “The nature of it creates some emotional challenges until they get to know her. We are a predominately rural conservative state and those mindsets don’t change over night no matter what’s on TV or in print. That’s a challenge Gen lives with daily in this vocation.”

Perhaps the site of a female officiating a basketball championship game in South Dakota is something new, but it shouldn’t be considered a novelty either.

In the nearly 50 years since Title IX was signed into the law, one of the biggest impacts the law has had was giving generations of women the opportunity to play sports — both at the high school and college levels. Because of this, 50 years later, women are getting involved in other areas of sports such as coaching and officiating, and as a result are breaking down even more barriers.

“I don’t want to be given an unfair advantage because of my gender. I want to be viewed by my peers as an equal,” DeMent-Osborn said. “Now if me getting an opportunity like (being the head official for a championship game) will help empower other women to be courageous and empower them and purse their goals, then great, but I don’t want to be in the spotlight.”

Although she insists she doesn’t want to be at the center of attention, she nevertheless is an inspiration for countless young women in the state.

She recalled a story once where a parent asked her if she was the referee and the parent asked if she could talk to her 16-year-old daughter who was interested in becoming a referee someday.

“I think one of the obstacles as a woman, you need to go to college and start your career path and then you have a family,” DeMent-Osborn said. “There is not a lot of room for officiating in that path of life. I waited to have children so now I just have to find that balance between my career and my children and then basketball. Which is why I only work two or three games a week at the most. These guys might work four or five nights.”

While DeMent-Osborn’s presence on a basketball court is an inspiration for young women with dreams of following in her footsteps, perhaps the biggest inspiration is her success both on and off the court for a place that holds a special place in her heart.

DeMent-Osborn’s road starts where she calls home, Oglala, South Dakota on the Pine Ridge Indian Reservation. It was there where her sisters had to over come the difficulties and challenges of life on the reservation. A place where some have categorized it being a third-world country, and where Oglala Lakota County (formerly known as Shannon County) and Todd County are among the poorest counties in the country.

“I remember as a child on the reservation. We were so dirt poor, we couldn’t afford dog food. My mom had to feed our dog powered eggs,” she said. “We were on food stamps and now to see how we have all overcame that and we become successful.”

DeMent-Osborn graduated from Hot Springs in 1997 and went to play basketball in college in Wyoming. From there she lived in Florida for a bit before returning to South Dakota in 2002. Today she works as an accountant in Rapid City, while her twin sister is a civil engineer and her older sister is a physician in Philadelphia. Meanwhile other childhood friends of hers from the Pine Ridge Indian Reservation have gone on to successful careers including one who attended college at Stanford and two that hold PhDs

“We have those relationships and we have that respect,” DeMent-Osborn said. “We all had a tough road to go and we persevered coming through the reservation. You hope those kids get the opportunity to succeed.”

DeMent-Osborn recalled a story about a game she was officiating at Black Hills State and there was a girl from Todd County. She said this girl had busted her tale off to get through high school and now was playing college basketball. The girl was driving for a layup and was fouled and the two found themselves sharing a moment.

“She’s standing there at the free throw line and I gave her a look that ‘I’m so proud of you. I’m so happy to see you succeed’ and I passed her the ball and she looked at me through our eyes in what I was saying to her,” DeMent-Osborn said. “I’m a mom and I see these kids and I care about them. I just want to give them the encouragement. We as a society have no problems pointing out people’s flaws but we don’t do enough to give support and atta boys. That’s why I do this. It’s to see the joys of these kids.”

While DeMent-Osborn made history in becoming the first Native American woman to to be a head official at a championship game, she's not done breaking down other barriers.

“My goal is to have my children referee with me,” she said. “You see a lot of father and son combos, I’ve seen a father-daughter combo but I never seen a mother-daughter combo. That’s my goal. God willing I can make it for another 10 to 12 years.”