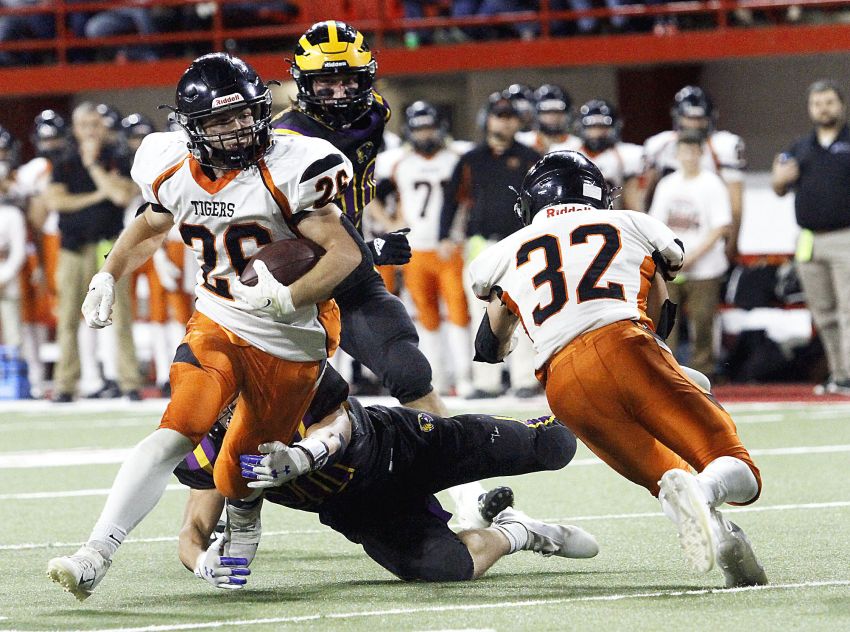 Howard’s John Callies runs for some yardage during the first half of the 9A State football championship earlier this season at the DakotaDome in Vermillion.
(Rodney Haas / 605 Sports)

Here is the complete Class 9A all-state team:

Hettick completed 109 of 171 pass attempts for 1,732 yards and 27 touchdowns, against just three interceptions. The two-year starter has helped the Wolverines for 21-2 the past two seasons.

“Tray is a great leader and mentally tough kid,” Herreid/Selby Area coach Clayton Randall said. “He's a leader for our offensive unit. Tray is a winner.”

Callies paced the Tigers with 1,643 rushing yards and 31 touchdowns on 139 carries. The all-conference performer averaged 6.8 yards per carry. He was the Joe Robbie MVP and most outstanding back of the state championship game.

“John has been a workhorse for us the last two years and a leader of our team,” Howard coach Pat Ruml said.

Begeman did a little bit of everything out of the Wolverines’ backfield. He posted 1,720 rushing yards and 24 touchdowns on 208 carries. He added 34 receptions for 570 receiving yards and nine touchdown receptions. He was an all-state defensive back selection last season and has 24 career interceptions.

“Brenden has a tremendous feel for the game of football,” HSA coach Clayton Randall said. “He makes plays all over the field. Brenden is a workhorse on the football field.”

Garry racked up 692 rushing yards and 11 rushing touchdowns on 44 carries. He added 18 receptions for 451 yards and nine touchdown receptions (25.1 yards per reception). He also had 172 return yards and two special teams touchdowns, 70 tackles and one interception on defense. He was the all-Dakota Valley Conference most valuable player.

“Kalen is a special player that makes an impact in all three phases of the game,” De Smet coach Brendon Pitts said. “He has the ability to make a big play every time he touches the ball.”

Amiotte finished with 1,195 rushing yards and 17 touchdowns on the ground. He added 22 receptions for 395 receiving yards and three touchdown receptions. He was an all-state defensive back last season and the Western Great Plains defensive MVP this season.

“Cedar was our go-to guy all year,” Wall coach Lex Heathershaw said. “He is a captain and one of our hardest workers. He has the ability to play football on Saturdays.”

“If we needed to throw the ball in a big situation, Rylan was the guy we tried to find,” Wall coach Lex Heathershaw said.

Osthus caught 26 passes for 472 yards and eight touchdown receptions (18.2 yards per reception). He added 26 carries for 244 yards and seven touchdowns on the ground. On special teams, he finished with 578 return yards and four special teams touchdowns. Defensively, he logged 62 tackles and four interceptions on defense. He was an all-conference performer.

“Rett was a big part of our success on offense and defense this year,” De Smet coach Brendon Pitts said. “He was a big playmaker that defenses had to adjust to try and defend.”

Sifore, a future South Dakota State University Jackrabbit, had 16 catches for 343 yards and eight touchdown receptions. The all-conference selection was the Class 9A’s most outstanding lineman of the championship game.

“Just a great blocker and catches the ball with such ease,” Howard coach Pat Ruml said. “Great agility for a big man. Played center last season and moved to TE this year.”

Gregg anchored the Wolverines’ offensive line that produced 4,913 yards and 70 touchdowns this season. He was a three-year starter and two-time all-state selection.

“As a three-year starter and leader of our line we have gained over 15,000 yards behind Chance,” HSA coach Clayton Randall said. “He's a leader and plays with a motor.”

“Kaden is our best interior OL,” Howard coach Pat Ruml said. “We ran behind him and Sifore 75% of the year.”

Wilkinson helped the Bulldogs pass for 1,191 yards and rush for another 1,846 yards. On defense, he racked up 29 tackles and seven sacks.

“Damon anchored an offensive line that produced 1,191 passing yards and 1,846 rushing yards,” De Smet coach Brendon Pitts said. “When we needed yards the most, we often ran behind him.”

“Cayne is our best offensive lineman,” Wall coach Lex Heathershaw said. “He is fast and physical and got really good at getting to the second level.”

Wilkinson completed 85 of 138 pass attempts for 1,209 yards and 19 touchdowns. He added 88 carries for 290 yards and nine touchdowns, while he posted 76 tackles on defense.

“Colt was a large part of our success in all three phases of the game,” De Smet coach Brendon Pitts said. “He led our team in tackles for the third season. He is a player that made a ton of plays for us on offense and defense this season. His toughness made him a hard player to block.”

“Taron has started for our program for four years,” Burke coach Mike Sebern said. “He has been a staple of our offense since he was a freshman. We moved him to fullback this year and he excelled.”

“Atticus dominated his side of the ball,” Howard coach Pat Ruml said. “He's an option destroyer. Most teams ran his way -- away from Sifore and he made the plays.”

“Norman is an animal for us,” Wall coach Lex Heathershaw said. “He draws double teams most games and many teams choose to run away from him.”

Wiersma racked up 42 tackles (8.5 tackles for loss) and 2.5 sacks for the Warriors. He also blocked a punt, forced a fumble and recovered a fumble this season. He’s a two-time all-conference performer.

“Jonah was the workhorse of the team,” Castlewood coach Doug Ruesink said. “He was in the weight room all offseason making sure he was ready to take on his senior year. He was a silent leader for the team. He moved guys on offense and was relentless on defense.”

Van Regenmorter finished with 45 tackles and five sacks along the Bulldog defensive front. He was an all-conference selection.

“Blake was a big part of our defensive success,” De Smet coach Brendon Pitts said. “He helped us hold opponents to an average of eight points per game. He plays the game with a lot of heart and determination which made him a tough player to go against.”

Ohrtman led the Kougars up front with 66 tackles and three sacks. He has 155 tackles and nine sacks so far in his career.

“Reece is a tremendous football player with great power,” Kadoka Area coach Chad Eisenbraun said. “He has been a starter for the Kougars his entire high school career and has been the lead blocker on over 6,600 yards rushing in his first three seasons. He is a load to bring down at the fullback and has developed into a huge offensive weapon.”

Sayler finished with 134 tackles (18 tackles for loss), four interceptions, one sack, one forced fumble and one fumble recovery. He’s a four-year starter and a two-time all-state performer.

“Trey is a physical hard-nosed football player,” HSA coach Clayton Randall said. “There isn't a play during a game where he doesn't seek contact. Trey is our emotional spark plug. He gets us going. He started 45 consecutive games in his career.”

“Trevor is a student of the game and has worked his way into a first-team all-state caliber player through dedication in the weightroom,” HSA coach Clayton Randall said. “Trevor knows where all nine guys need to be on defense.”

“Our best player at LB and RB,” Howard coach Pat Ruml said. “He was a tenacious hitter on D and a tenacious lead blocker.”

Hanson racked up 72 tackles, three quarterback sacks and two forced fumbles this season. He finished with 127 career tackles. He was a two-year starter and two-year all-conference member. He was the Lake Region Conference’s defensive player of the year this season.

“Coming into this season, we felt like we might struggle early, but would get better as the season progressed,” Warner coach Kerwin Hoellein said. “That is exactly how it played out and Dawson was one of those kids that helped keep the ship going in the right direction. He is a fierce competitor and a player that did an outstanding job helping a young team have a great season.”

Gohn posted 57 tackles (4 tackles for loss), four interceptions and two defensive touchdowns. For his career, he logged 115 tackles and 11 interceptions.

“Marion was a versatile player,” Wolsey-Wessington coach Gordon Hooks said. “He moved him from quarterback to running back and was very productive. He was a three-year starter on both sides of the ball.”

Kirwan posted 26 tackles (2.5 tackles for loss), seven pass breakups and two fumble recoveries in the defensive backfield. On offense, he racked up 1,456 rushing yards and 18 touchdowns.

“Carson was the most athletic person on the field for us,” Castlewood coach Doug Ruesink said. “We did what we could to get him the ball as much as possible. He was willing to adjust and learn new formations/positions to help make the team better.”

Will is a tough, hard nosed player despite being 157 pounds,” ORR coach Logan DeRungs said. “He only played defense seven games due to a shoulder injury. Will comes up and hits.”

“Blair is a great special teams guy,” Wall coach Lex Heathershaw said. “His leg gives us a big advantage on defense. He not only plays all special teams, but also starts at TE and LB for us as well. He has been kicking for us since his eighth-grade year.”

Fredrickson posted 32.1 yards per punt and 27.9 yards per kickoff, while posting three kickoff returners. He racked up 960 rushing yards and 18 touchdowns on the ground, while passing for 772 yards and five touchdowns. He’s a two-time all-conference performer.

“Aidan was a threat in the return game right away for us this year,” Britton-Hecla coach Jacob Skogstad said. “We were able to have a good starting field position on nearly every kickoff due to short kicks or big returns from Aidan.”