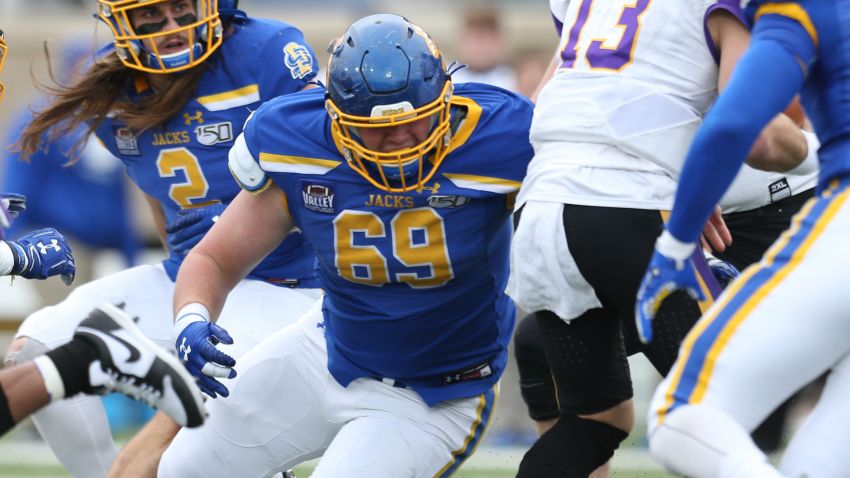 A HEART OF A WARRIOR

BROOKINGS --- When it comes to playing football on the big stage, Krockett Krolikowski is no stranger to it.

The former Winner Warrior and current South Dakota State defensive tackle was a member of the 2016 Warrior state championship team and last week he took the field again hoping for a national championship.

Although, those dreams were dashed by Sam Houston State’s late touchdown to give the Bearkats a 23-21 win, the experience five years earlier helped prepare him for last week’s FCS championship game.

The 6-foot-2-inch, 290-pound junior who is majoring in construction management in Brookings will have one more year left to achieve the goal of being a national champion. However, in the meantime, he’s also racked up his share of accolades while a member of the Jackrabbits.

But despite these accomplishments, he still has a special place in his heart for what he accomplished in high school.

“That moment in high school, yeah everyone thinks this game the FCS championship game is big, but I always will remember those championship runs in high school,” Krolikowski said. “Those were special. Those were the first times. You feel the love of the game and you accomplished something big, there’s a lot of joy. That will hold a special place in my heart.”

While Krolikowski reminiscence on the purity of high school football and playing for the love of the game and the community, this season for him will also go down for another reason, mainly how it was conducted.

Last fall as the country was in the grips of a second wave of COVID-19 cases and college football was facing questions if they should play or not. The FCS decided to move its season to the spring, while the FBS decided to continue in the fall.

The move left SDSU playing an eight game regular season starting on February 19 and concluding on April 17 with 27-17 win over North Dakota State. Along the way the Jackrabbits had games against Illinois State and South Dakota canceled as a result of COVID-19 cases.

“I wouldn’t say it wasn’t much different playing football in the spring instead of the fall other than the weather was getting nicer instead of colder,” Krolikowski said.

He added the only real difference of playing football in the spring instead of the fall is the class load. Krolikowski said typically the team tends to take more classes in the spring. He said the other difference was not able to have the same amount of fans in the stands and playing a limited number of games.

“It’s been different, but I wouldn’t say too different from the fall,” Krolikowski said. “The team has been good competitive wise.”

This year Krolikowski record 10 tackles including nine solo tackles with his last one occurring in last week’s championship game.

It has been a comeback season for Krolikowski who getting back to normal after suffering an ACL tear during his red shirt freshman year.

“That season was a struggle, I didn’t do very good,” Krolikowski said of his 2019 season. “I’m still not up to full speed but you are never going to be full speed, so you have to take it with a grain of salt. You find your role; you play with it and you overcome.”

Winner-Colome falls to Madison in opening round

Spots are filling up fast in the road to Mitchell