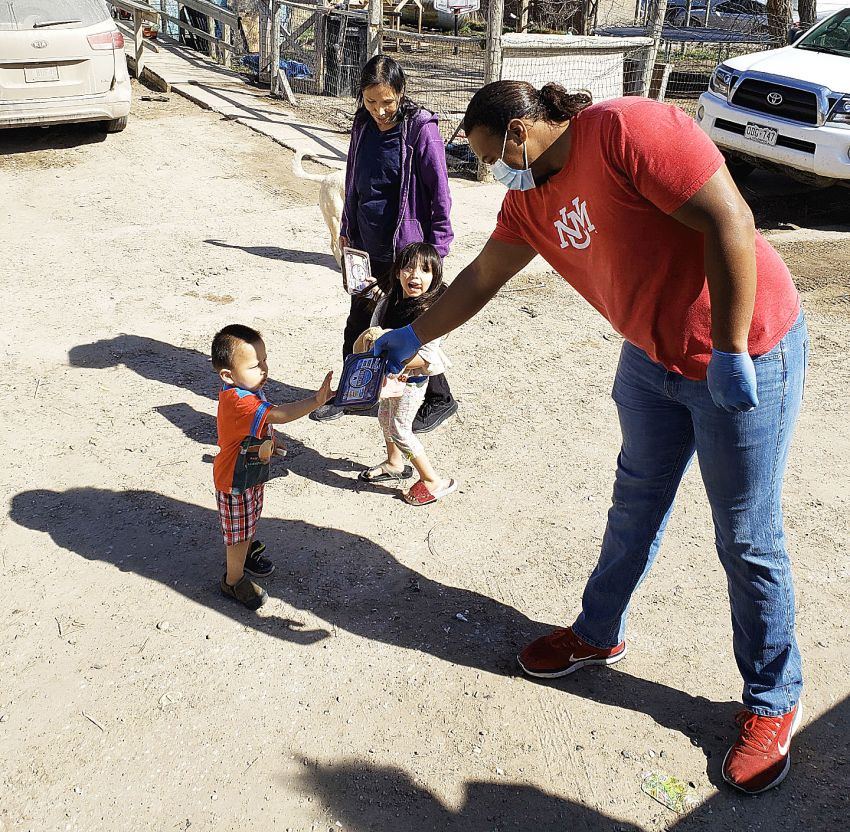 From the southwestern South Dakota reservation, which includes some of the poorest counties in the country and has been described by some as being a third-world country, Saltes’ mother set out for medical school in Phoenix where she would become a respiratory therapist and a pulmonologist.

From there she moved her family to Farmington New Mexico, on the Navajo Indian Reservation and eventually to Albuquerque where Saltes attended high school and later played football for the University of New Mexico.

“I never did image we would be going to New Mexico,” Saltes said.

Today the decision by his mother for a better life for her children has paid off. After a successful football career with the Lobos, Saltes has the potential to make history in becoming just one of a handful of Native Americans, and the first from the Pine Ridge Indian Reservation to get drafted by a NFL team.

“It’s humbling to me to be in this position,” Saltes said. “It also motivates me knowing that I am blazing the trail and I’m one of the first to do it and the way I’m doing it and how I do it is setting the stage to potentially have kids follow in my footsteps.”

According to Saltes, the 6-foot-5, 322-pound offensive lineman has been climbing on NFL team’s draft boards since he had his pro day in New Mexico.

According to the Mountain West Wire, Saltes impressed pro scouts at his pro day by running a 40-yard dash in 4.94 seconds, which ranked fourth among linemen at the NFL Combine. The time also caught the attention of scouts on hand from the San Francisco 49ers, Los Angeles Chargers, Dallas Cowboys, Arizona Cardinals, Detroit Lions and the Miami Dolphins.

“Right now what I’m hearing is Day 2 or Day 3 or undrafted at the very least,” Saltes said. “At the end of the day as long as I get the opportunity to make a team, that’s all that matters. I would say most likely Day 3 in the fifth, sixth or seventh rounds.”

Getting drafted is one thing, making the team is another for Saltes. He added that a lot of people think once you get drafted, you make the team. While that may be true for those first round selections, the same can’t be said for the later round selections where Saltes is expected to go.

“It’s all hard work but it doesn’t stop after draft day,” he said. “You have to continue to build upon that and see if you can make the team and make the roster.”

The NFL Draft is set to begin on Thursday, April 29 with the first round and then pick up the next two days with rounds 2-3 on Friday and 4-7 scheduled to take place on Saturday.

“I’m excited,” Saltes said from his family home in Pine Ridge, where he and his family will watch the draft. “It’s defiantly been an unprecedented year with football and COVID. It’s a good year. There are a lot of athletic offensive linemen this year. It will be interesting to see what happens.”

Regardless of what happens with the draft, it will conclude what has been a challenging final season of college football for Saltes, which began last spring with the sports world being shut down because of COVID and continued in the fall.

“We were six practices in (spring football) and then everything got shut down so we were stuck at home for months,” he said. “We couldn’t finish spring football. We couldn’t go back to the university and lift. We couldn’t do any of that stuff. We lost the entire offseaosn.”

Saltes added that once the Lobos were able to start practicing again, it was met with even more challenges with restrictions and the inability of hitting the weight room or having to wear masks while lifting. Then there was the unknown if the Mountain West Conference was actually going to be play football. Then once the decision was made, the team had to play its season in Las Vegas because of COVID restrictions in New Mexico.

“Our governor (New Mexico governor Michelle, Lujan Grisham), she wouldn’t allow us to play football,” Saltes said. “That was the entire state. They shut down everything. There was no high school sports, no collegiate sports. It was definitely a crazy, crazy year for us when it comes to football and COVID and all the stuff that we did.”

Although his college football career ended in an unorthodox fashion, it still didn’t phase Saltes in anyway.

During his time at UM he was a two-time All Mountain West mention along with being named Lobo Scholar Athlete three times and the Mountain West All Academic selection in 2018 and 2019.

But while the accolades are nice for Saltes, who graduated with a degree in political science and is currently looking at attending law school, his passion still remains with the community he considers home, Pine Ridge.

“Every chance I get I always go back to Pine Ridge,” Saltes said. “I have my grandparents and all of my friends and relatives that I grew up.”

Saltes has returned every summer to the Pine Ridge Indian Reservation where he’s been active in the community. He recently worked with the Ogala Lakota Tribe to distribute needed supplies during the COVID-19 crisis and has worked closely with his grandmother’s BEAR Program, which she started at first as a literacy program, but has now included a suicide prevention efforts.

“My grandmother is the backbone of this reservation,” Saltes said of his grandmother Tiny DeCory. “She’s saved so many lives. All the young kids love her to death. She’s like a celebrity among the young people with all the work that she’s done. Instead of being a celebrity for my grandmother, she’s like the beacon of life in a land of darkness.”

“For me to have this platform (football) and to be able to shed light on issues, it’s important to me,” Saltes said. “A lot of young people on this reservation and reservations across the country and even minority communities, a lot of us feel forgotten or nobody cares about us or we don’t have a voice. I want to be able to give a voice to the voiceless and to be able to stand up for those who might not be able to.”

While Saltes’ focus right now is to get drafted, make a team and have a long successful football career, he’s also preparing himself for life after football. He said he plans on eventually going to law school and work in the legal system or run for office.

“Whatever avenue I decide go on, it’s going to be centered around making change and making a difference and advocating for others,” Saltes said. “We will see what route that ends up becoming. That’s definitely the plan.”

Saltes is also not immune to the limelight that would be shined on him as being one of a handful of Native Americans playing in the NFL, and what it would mean for the people of Pine Ridge to see him play on Sundays. He said the pressure keeps him motivated and makes him understand the gravity of the situation. He added that it makes him want to go out and succeed and do well and be a good role model.

“We definitely have our issues. But no place is without its issues,” Saltes said of life on the Pine Ridge Indian Reservation. “It’s such a beautiful place here. The people are beautiful, our culture, our history. There is a lot negativity but there are a lot of positives that I wish more people really knew.

“We have so many positive role models that come from here that not a lot of kids know about. I really wish they would be more aware of that and be aware of the people that come from here. There are a lot of well-educated, smart people that are doing some amazing things. Not a lot of us know about them. We tend to focus on sports here, which is fine, but there is a lot more for us. I wish we would plug that more and show more of that.”

Winner-Colome falls to Madison in opening round

Spots are filling up fast in the road to Mitchell