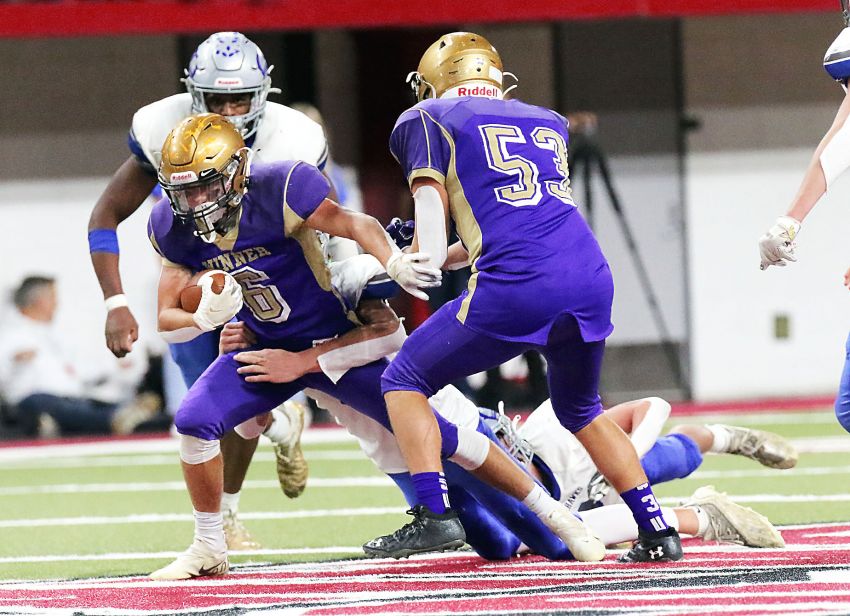 Winner’s Kaden Keiser tries to shake away a tackler during the second half of the Warriors’ 40-8 win over Bridgewater-Emery-Ethan in the 11B state championship earlier this season at the DakotaDome in Vermillion.
(Rodney Haas / 605 Sports)

Winner had a class-high six players selected to the Class 11B all-state team, which was selected by the South Dakota Football Coaches Association.

Here is a complete list of the Class 11B all-state team:

Dvorak produced 600 receiving yards on 52 receptions and six touchdowns. He added two rushing touchdowns. In his career, he had 66 receptions for 790 yards and nine touchdown receptions.

“Nolan is one of the most well rounded players we have had in Wagner in the last 21 years I've been coaching,” Wagner coach Jeff Podzimek said. “He was a great leader for us. He made our program better by the leadership he demonstrated and the competitive nature he played with.”

“Mason is a player that makes an impact on every play,” WWSSC coach Corey Flatten said. “Teams had to always respect his receiving ability but was an excellent blocker in the trenches or in space.”

“Riley has been a huge part of our success the past two years,” Winner coach Trent Olson said. “Last year he played fullback for us but unselfishly moved to wingback this season.”

Kayser capped off a productive career this season. He rushed for 1,410 yards on 203 carries and had 16 touchdowns. The two-year Big East Conference selection finished with 3,199 yards and 43 rushing touchdowns in his career.

“Koby has been a leader for us throughout his career,” BEE coach Jeff VanLeur said. “He is a very aggressive running back, hard runner and has good vision.”

“Clay was the workhorse of our offense the past two seasons,” WWSSC coach Corey Flatten said. “He has a combination of power and quickness that makes him an elusive back and difficult to tackle.”

Miles was MCM’s top receiving threat this season, finishing with 1,012 receiving yards and 11 touchdown receptions. He averaged 113 yards per game and the three-year starter had more than 1,800 receiving yards in his career.

“Cody would get double teams in a lot of games,” MCM coach Shawn Flanagan said. “One on one he was very hard to cover. Great ball skills, footwork and being able to make defenders miss in the open space.”

Danziesen was a key cog in Sioux Valley’s explosive offensive attack. He finished with 21 receptions for 610 yards and hauled in nine touchdown receptions. He added 383 rushing yards on 65 carries. He was an all-Big East Conference performer.

“Very dynamic, explosive player,” Sioux Valley coach Dan Hughes said. “We couldn't get him the ball enough. Great runner after the catch, makes people miss in the open field and has elite speed.”

“Every team had to know where this player was on the field,” Beresford coach Scott Ebert said. “Big play potential at any time.”

Pravacek was instrumental in Winner’s ground attack, which racked up 3,500 rushing yards. He was the most outstanding lineman in the past two Class 11B state championships. He’s a three-year starter and team captain.

Christensen, a future South Dakota State University Jackrabbit, anchored an offensive line that produced 1,833 rushing yards. On defense, he was part of a unit that allowed 11.4 points per game. He finished with 14 tackles and three sacks after missing the first part of the season with a knee injury. He was an all-state defensive lineman in 2020 and has 129 tackles, 31 tackles for loss, 8.5 sacks, seven forced fumbles, four fumble recoveries and three interceptions on defense.

“Quinten is a force on both sides of the ball,” WWSSC coach Corey Flatten said. “He continued to improve from offseason knee surgery as the year went on. He is one of the most dominant linemen that put on a Blackhawk uniform and is an instinctive player and leader.”

Willuweit powered the Warriors offense that rushed for 3,500 yards. He’s an all-conference selection, three-year starter on the offensive line and team captain.

“The most physical offensive lineman we have had in our program,” MVP coach Brent Olson said.

“He has been starting since a freshman and is team captain,” EPJ coach Jake Terry said.

The three-year starter helped the Cossacks rack up more than 4,000 total yards for the second straight season. He was an all-Big East Conference honoree and an honorable mention all-state selection in 2020.

Rus rarely left the field for the Titans. On offense, he threw for 484 yards and had seven passing touchdowns. He also rushed for 559 yards and had 12 more scores. Defensively, he posted 41 tackles (9.5 tackles for loss), five sacks, three pass breakups, two forced fumbles, one interception and one fumble recovery.

Honomichl threw for 1,676 yards and 17 touchdowns, while completing 64% of his passes. He added 356 rushing yards and eight more scores. For his career, he passed for 1,907 yards and 20 touchdowns.

“Dustin is an amazing leader,” Wagner coach Jeff Podzimek said. “He is a three-year starter who played both QB and TE and excelled at both positions. He stepped in this year as the starter at QB and excelled.”

Cole logged 2.5 sacks, 13 tackles and four tackles for loss. For his career, he posted 39.5 tackles, 13.5 tackles for loss, 11 sacks and three interceptions. A team captain, Cole was Winner’s quarterback this season. He threw for 551 yards and 11 touchdowns, while rushing for 201 yards and 13 more scores.

Vesely finished with eight tackles (3.5 tackles for loss) and returned both his interceptions for touchdowns this season. He finished his career with 36 tackles, 14 tackles for loss and four sacks.

“Possibly the best run stopping DE we have had in Winner in my 21 years of coaching here,” Winner coach Trent Olson said.

Tjaden was a big reason Beresford advanced to the Class 11B semifinals. He posted 57 tackles (42 solo) and finished his career with 161 tackles and 12 sacks. He’s a four-year starter and three-time all-conference selection.

“Brynn is arguably the toughest kid I have ever coached,” Hot Springs coach Ben Kramer said. “He was beat up his junior year and just kept coming back for more.”

Christopherson logged 129 tackles (13 tackles per game) and three interceptions to pace Sioux Valley’s defense. He finished with a school-record 369 career tackles on his way to earning all-conference status. He was an all-state honorable mention honoree last season.

Klumb, who was also BEE’s quarterback, posted 77 tackles, four sacks, four fumble recoveries and two interceptions on defense. He was a two-year starter and all-conference selection.

“Kaden is an athlete that coaches dream about coaching,” BEE coach Jeff VanLeur said. “He's been a great leader.”

Larson posted 79 tackles, four interceptions (one returned for a touchdown) and one sack on defense. He added 900 rushing yards and 11 touchdowns on offense. The two-year starter had more than 150 tackles in his career.

“Teams would run away from Matt,” STM coach Wayne Sullivan said. “Every team knew where (Larson) was on the field.”

Martinez was a ball hawk in Roncalli’s secondary. He finished with 71 tackles, seven tackles for loss, four interceptions and one fumble recovery for a score. He also had a team-high 20 catches on offense. The all-conference performer has seven career interceptions.

Matt has been a three-year starter for us,” Aberdeen Roncalli coach Billy Young said. “He made his biggest impact at critical moments of games. Made the game saving tackle in our first playoff game.”

“Sutton does a great job of reading pass or run and is a great defender,” BEE coach Jeff VanLeur said. “He has great speed and is very coachable.”

“Jackson has started at kicker for us since eighth-grade and QB since his freshman year,” Aberdeen Roncalli coach Billy Young said. “He added punting to his list of duties his sophomore year. He is one of the best I have ever seen at placing the ball inside the 10 on punts. He has the ability to flip the field with his leg and pin opponents deep in their own end of the field. In addition to kicker, punter, and QB Jackson also starts for us at cornerback.”

Klooz averaged 39.6 yards per kickoff and had two touchbacks. He punted 13 times for a 36.4 average and added 10 special teams tackles. He posted 24.8 yards per kickoff. He was a two-time all-conference selection and a 2020 honorable mention all-state selection.

“Lincoln is a three-year starter that never came off the field.” MVP coach Brent Olson said.