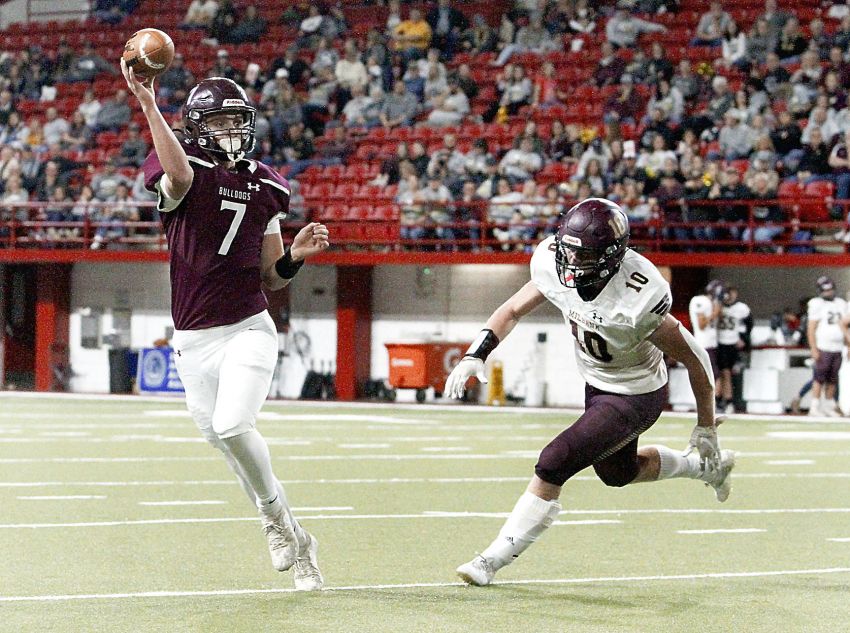 Madison quarterback Nate Ricke throws a 4-yard touchdown pass to Joe Gors during the third quarter of the Bulldogs’ 31-0 win over Milbank in the 11A state championship earlier this season at the DakotaDome in Vermillion.
(Rodney Haas / 605 Sports)

Here’s a complete list of the Class 11A all-state football team:

“Nate brings a multiple threat athlete to the position that has allowed us as an offense to be nearly unstoppable,” Madison coach Max Hodgen said. “Nate has a great understanding of the game and is able to adjust to what the defense throws up against us. We have faced a multitude of different defenses from week to week and Nate has been able to recognize what they are trying to take away and exploit what they are giving us.”

Voeltz was limited to seven games this season due to injury, but accounted for 379 rushing yards and six touchdowns on 67 carries. He averaged 5.66 yards per carry and added 12 receptions. He was an all-state honorable mention honoree last season and is an all-conference performer.

“He worked extremely hard to come back and played extensively in our semifinal game against Vermillion,” Milbank coach Brian Allmendinger said. “He is an exceptional blocker and helps the line with calls while also being heavily counted on to run the ball.”

“As a captain, Jaden was the heartbeat of our team,” Sioux Falls Christian coach Jared Smith said. “He gave everything he had on every play, both offensively and defensively.”

Williams logged 180 rushing yards on 42 carries, while hauling in five touchdown receptions. He finished his career with 223 rushing yards on 63 carries. Williams was a three-year letterwinner and a two-year all-conference selection.

“Beau has been an outstanding player for us since he was a freshman, starting all three years on defense and the past two years at fullback,” Canton coach Rich Lundstrom said. “He has worked hard on his weaknesses and turned them into strengths. Our offense would not work near as well without Beau and there would be a huge hole in our D, if he wasn't there.”

Ruesink produced in the passing game and rushing game for the Quarriers. He logged 788 rushing yards on 142 carries and 11 touchdowns. He added 473 receiving yards and nine touchdown receptions on 21 catches.

“Landon is a great football player and person,” Dell Rapids coach Jordan Huska said. “He was a big difference maker for us on offense, defense, and special teams over the last three years. Not only is he a good football player, but he is a great leader and person for our younger guys to look up to in how to do things the right way on the field, in the classroom, in the weight room, and when they are away from school.”

“Jackson has been one of our best football players for two years,” Lennox coach Matt Luze said. “For a man of his stature, he is completely fearless. He will dole out physical contact to whomever is in his way and his explosiveness through the whole is the best I've coached in a long time.”

Young missed time due to an ankle injury, but still logged 806 rushing yards and six touchdowns. He’s a two-time all-conference selection and was an all-state honorable mention pick last season. He finished his career with 2,097 yards rushing and receiving, while scoring 12 touchdowns.

“Isaiah was our go-to running back for the last two years,” Sioux Falls Christian coach Jared Smith said. “The attention he commanded definitely helped our quarterbacks in the run game.”

“Braden was an explosive receiver for us this year,” West Central coach Chris Hernandez said. “He is the first receiver in West Central history to have 1,000 yards receiving. He also was a dynamic return man, with a punt return for a TD against Milbank. Most defenses had to game plan for him and is easily one of the best receivers in the state.”

“Steven has been a mainstay on our team for three years with the last two being a dynamic wide receiver for us,” Lennox coach Matt Luze said. “His ability to take any play and make it a touchdown has been very vital for us this year.”

Eben was a dynamic playmaker with the ball in his hands. He posted 480 receiving yards on 35 receptions, while rushing for 748 yards on 98 carries and 16 touchdowns. He had 1,518 all-purpose yards this season. For his career, he finished with 71 receptions for 1,016 yards. He had 2,435 all-purpose yards and 28 touchdowns, while rushing for 1,165 yards.

“Payton has developed into one of the best wide receivers we've had,” Canton coach Rich Lundstrom said. “He's also a great weapon at punter. He flipped the field or pinned our opponents deep on many occasions.”

Baldwin helped pave the way for an offense that gained 3,110 yards this season and 14,068 yards as a four-year starter.

“Marshall has been an incredible player for us, starting four years on the offensive line and three on the defensive line,” Canton coach Rich Lundstrom said. “He was our best and most consistent lineman.”

Olson, who missed time late in the season with an injury, was instrumental in Madison’s ground and passing attack.

“Team leader both on and off of the field,” Madison coach Max Hodgen said. “Gabe set the tone on the offensive and defensive line through his play. Never complained, worked hard and always put the team above self. Helped coach teammates when injured.”

Brady was responsible for 13 touchdown blocks and 11 pancake blocks.

“Huge offensive lineman who can pull and finish blocks and gets to the second level,” Vermillion coach Tom O’Boyle said.

Rufer helped the Bulldogs rush for 190 yards per game on their way to the title game.

Stubbe logged 23 pancake blocks this year and was part of an offense that produced 3,200 yards from scrimmage. He was a two-time all-conference performer.

“Jacob was the heartbeat of our offensive line,” Lennox coach Matt Luze said. A player that cares more about his teammates than himself, he's the definition of a selfless player.”

An imposing lineman, Christensen anchored an offensive line that rushed for 1,742 yards. He was a two-year starter and an all-conference honoree.

“Connor is a big, tough football player,” Tri-Valley coach Dan Snethen said. “He became the anchor of our offensive line this season. Defensively, Connor was a very productive player as nearly 1/3 of his tackles were for loss including seven quarterback sacks. As a captain, he set an outstanding example with his work ethic and his positive personality.”

“One of the best athletes in the state,” Lakota Tech coach Casey Means said. “He can play any position on the field and averaged almost 10 yards a carry.”

“Cam is a leader, not just on the field but throughout the school,” Madison coach Max Hodgen said. “His work ethic, attitude and drive are an outstanding example of the expectations we have for all our athletes. He works to support his teammates and has been key to getting the underclassmen ready for the varsity level.”

Madsen was a key cog for West Central’s defensive unit. He posted 41 tackles (25 solo stops), 8.5 tackles for loss and 8.5 sacks this season.

“Zach was quick off the ball, very difficult to block and had a motor that didn't quit,” West Central coach Chris Hernandez said. “He led our team in sacks and constantly put pressure on quarterbacks. Many offensive linemen struggled blocking him with his low pad level and motor. He was one of the quickest defensive linemen in our classification.”

“Avery is the best D-lineman we've ever had at Canton,” Canton coach Rich Lundstrom said. “He has a knack for getting to the quarterback.”

Nelson produced 50 tackles, eight tackles for loss, two sacks, one forced fumble and one pass breakup for the Chargers. He was an all-conference selection.

“Mitchell was our best defensive linemen,” Sioux Falls Christian coach Jared Smith said. “He was almost impossible to block with one man. He led our defensive linemen in tackles while missing three games.”

“Trey has been a leader of the Bulldogs the last two seasons and his teammates have the utmost respect for him,” Madison coach Max Hodgen said. “He leads by example and is always willing to do whatever it takes to help the Bulldogs win.”

Maras racked up 108 tackles (53 solo), 10.5 tackles for loss, two pass breakups and one interception this season. He finished with 177 career tackles.

“Logan Maras was one of the best Linebackers in the conference this year,” West Central coach Chris Hernandez said. “He had 7 games with 10+ tackles, 3 games this year with 17 tackles.  We were tough against the run this year on defense and a lot of that is because of Logan.”

Bender racked up 40 tackles, five tackles for loss and three interceptions for the Bulldogs.

“Connor plays inside linebacker for us,” Milbank coach Brian Allmendinger said. “He is a two year starter. This season, Connor was responsible for all the defensive calls. He may not be the biggest linebacker but is smart, reads well and consistently leads our team in tackles every week.”

Schwenn racked up 27 tackles and one interception this season.

“Bennett is the best athlete on our team,” Milbank coach Brian Allmendinger said. “He is a four-year starter and played in seven games due to injury. Made a game saving tackle against Canton. He rarely comes off the field as he also kicks, punts, and plays safety.”

“Gage Tennyson was a terror for a team that wanted to throw the ball, but always knew how to come downhill to make some really good tackles in their running game,” Custer coach David Williams said. “He has a tremendous knowledge of football and has been recognized by several colleges as a next level athlete. He will be joining USD's football team next year. He is a true football player that loves contact and plays extremely fast.”

Pankonen picked off six passes and returned three for touchdowns, while finishing with 52 tackles.

“Brayden has been a big part of our defense the last two years,” Dell Rapids coach Jordan Huska said. “He is a smart athlete that we can ask to do a variety of things and handle it without issue. He was the defensive back we would move and use to be around our opponent's best wide receiver.”

Henry averaged 41.28 yards per punt, dropped 10 inside the 20 and had a season-long 53-yard punt this season. Offensively, he logged 1,225 passing yards and 14 touchdowns, while rushing for six more touchdowns. He will pitch collegiately at Wichita State University.

“Austin has been a great football player for us over the last few years,” Dell Rapids coach Jordan Huska said. “Hard-working kid in the weight room and on the field. Austin is a good leader and role model for our younger guys. He affected a number of games with his consistent and good punting throughout the year.”

Weber averaged 21.7 yards per punt return, with a 56-yarder taken back for a score. He averaged 20.75 yards per kickoff return.

“Karson does a great job retrieving punts/kickoffs,” Milbank coach Brian Allmendinger said. “He is also our best cornerback and played extensively on offense as a running back and receiver. He is the team leader in receptions with 12.”