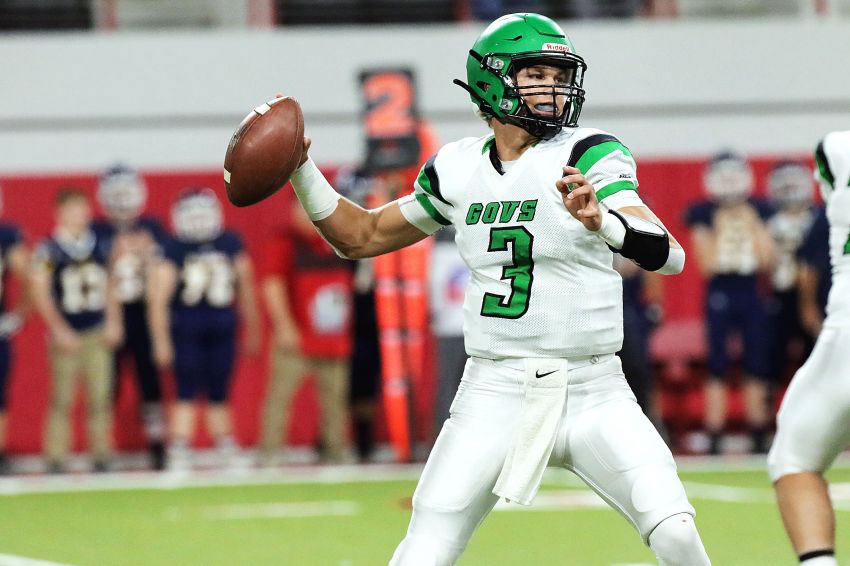 State finalists -- Pierre and Tea Area -- had a combined 10 players selected to the Class 11AA all-state football team, which was selected by the South Dakota Football Coaches Association.

Kienholz’s play catapulted Pierre to its fifth consecutive Class 11AA state championship. The multi-sport athlete powered the Governors to a comeback win over Tea Area in the championship game, finishing with 537 total yards and four touchdowns.

“Lincoln is the best player on our team and one of the best in the state,” Pierre coach Steve Steele said. “He has incredible raw ability and athleticism but really grew into the mental role of the quarterback this year and accepted the tremendous amount of pressure put onto his shoulders. He had an outstanding season taking care of the ball and leading our team to the successful season we have had.”

Vogele was productive with the ball in his hands. The big-bodied tight end finished with 22 catches for 465 yards and eight touchdowns, while averaging 21.1 yards per catch.

“Great athlete with great intelligence who played on both sides of the ball for us,” Aberdeen Central coach Scott Svendsen said. “I think he is the best tight end in the state.”

Van Tol’s play helped guide the Titans into the DakotaDome. He posted 946 rushing yards and nine touchdowns, while averaging 7.6 yards per carry. He added a touchdown reception and a passing touchdown. He led the Titans with a team-high 1,280 all-purpose yards, while he had two interceptions and 37 tackles on defense.

Weber racked up 781 rushing yards and 13 touchdowns out of the backfield. He added 255 receiving yards and one touchdown reception.

“He was instrumental in our program over the last three years,” Mitchell coach Kent VanOverschelde said. “A dynamic player that loved preparing, practicing, and playing football.”

“I would count Hunter as one of the most talented and dedicated players I've coached,” Brookings coach Jacolby Anderson said. “I was immediately impressed by his work ethic, eagerness to learn, and the amount of preparation he has put in to be the best football player possible.”

Karda was a productive back in his first year playing high school football.

The junior recorded 1,108 rushing yards and nine touchdowns on 91 carries, while averaging 5.8 yards per carry.

“A rugged runner who has a physical style of running the ball,” Aberdeen Central coach Scott Svendsen said.

“Jack is a great deep threat wide receiver who seems to never get tired no matter how many times we send him deep in a game,” Pierre coach Steve Steele said. “We challenged him in the offseason to become a major 1-on-1 threat and to force teams to have to put 2 guys on him, and he responded by doing exactly that.”

“Cole is one of our team captains and he is a leader on the field,” Watertown coach John Hodorff said. “Cole is a playmaker and does anything that is asked of him at any time.”

Sattler provided a big target for Tea Area’s passing game. He finished with 812 receiving yards and 15 touchdowns on 44 receptions.

Ostrem helped block for an offense that produced more than 2,900 rushing yards and 1,500 passing yards. The Titans also averaged 405 yards per game and 45 points per game.

The Patriots ran 70 percent of the time behind Maciejczak, who added eight carries for 46 yards and two catches for 12 yards.

“He has been a big bright spot for our team as we try to become competitive in AA,” Douglas coach Dan Maciejczak said. “He doesn't complain, he just comes to practice and not only works hard to get better but goes out of his way to help his teammates get better.”

Haak played center for the Bucks and the all-conference member is a three-year starter.

An imposing lineman, Rohrbach was instrumental in the Golden Eagles’ play upfront.

“Outstanding and dynamic quick tackle for us who gave great pass protection and was a key in helping us establish our run game,” Aberdeen Central coach Scott Svendsen said. “A multi-sport athlete who has started for 3 years.”

Longville helped the Bobcats log more than 3,000 yards this season, while averaging 217.8 rushing yards and 308.8 total yards per game. In the last two seasons, Longville helped Brookings rush for 5,515 yards and 76 touchdowns, while throwing for 1,937 yards and 24 touchdowns.

“Brock is an anchor of both the O-Line and D-Line,” Brookings coach Brady Clark said. “Constantly playing in opposing teams backfields putting pressure on the QB or causing havoc in the run game.”

Johnson, a towering offensive lineman, was a two-year starter that will play football next season at Northern State University.

“Paden has developed into a very good offensive lineman,” Watertown coach John Hodorff said. “Most notably his footwork for his size is impressive. He has been very reliable and a key piece to the success we've had on offense.”

Rohlfs piled up the yards for the Golden Eagles. He rushed for 647 yards and eight touchdowns on 63 carries. He added 1,509 passing yards and 17 touchdowns on 93 of 188 attempts. Rohlfs accounted for 81% of Aberdeen Central’s offense.

“Sam is a pure magician on the field,” Aberdeen Central coach Scott Svendsen said. “I have seen a lot of athletes throughout my years of coaching, and I haven't seen a kid do the things that he did this year in a long time.”

“Konnor was the leader for the Scooper offense for 2021,” Sturgis coach Chris Koletzky said. “A hard-working young man that has always led by example. Konnor's commitment in the offseason programs truly paid off this past year.”

“Ethan has been the rock of consistency on our O and DL for the past two seasons,” Huron coach Scott Spanton said. “He played some as a sophomore as well. He put in the time in the weight room and his commitment and work ethic have been an example for the younger players.”

Rutledge recorded 24 tackles and 26 assisted tackles, while he was a three-year starter for the Bucks.

“Jaden is an animal,” Pierre coach Steve Steele said. “He has a motor that never stops running and will do anything he's asked to do to the absolute best of his ability. He plays with reckless abandon and will never pull himself for being tired or banged up.”

Miller logged 57 tackles (38 solo stops), 25 tackles for loss, three sacks and one fumble recovery this season. He was an all-conference selection.

“This young man moved to Spearfish at the beginning of the season and has been with us for one season,” Spearfish coach Dalton Wademan said. “He is a high motor kid that gets off the ball and gets an initial knock back against offensive linemen. He is a sure tackler and his pursuit off the backside allowed him to get 25 TFL.”

VanOverschelde capped a productive career for the Kernels. He posted 85 tackles, 14 tackles for loss and two sacks this season. He finished his career with 305 career tackles and was a multiple all-conference selection.

“Passionate and dedicated athlete,” Mitchell coach Kent VanOverschelde said. “As his coach, it was a privilege to see his growth and learning as a leader and a person. Emotional and passionate football player, while securing second overall in MHS History in career tackles.”

“Ben is a leader for our team on and off the field,” Watertown coach John Hodorff said. “Ben is a very competitive person and expects the same from everyone around him. Ben has rewritten the tackle records for the Arrows both season and career.”

Jacobs finished with 81 tackles (44 solo), two sacks and eight tackles for loss during his junior season.

“Reese is the leader of our defense this past season,” Sturgis coach Chris Koletzky said. “He is as tough as they come and works extremely hard in the offseason.”

“Defensively, he did a great job in running down ball carriers from sideline to sideline,” Huron coach Scott Spanton said. “Plays with a chip on his shoulder and was a big leader of our defense as our Mike LB.”

“Brady Hartwig was one of our leaders throughout the off season in the weight room and led our defense,” Spearfish coach Dalton Wademan said. “He did everything for us playing linebacker, quarterback, running back, punter, and kick returner.”

Worth recorded 14 tackles, four pass breakups and two interceptions for the Titans.

“Lincoln allows us to do so much more on defense because of his ability to cover the field,” Brookings coach Brady Clark said. “He did a great job of aligning himself and eliminating the big play.”

“A team captain who brought leadership and integrity to our team,” Aberdeen Central coach Scott Svendsen said. “Made some great defensive plays when we needed them.”

“Mayer is the brain of our back end,” Pierre coach Steve Steele said. “He's responsible for lining up and checking our coverage, getting our DB's on the same page, and sometimes making the people in front of him right. He's another kid with an extremely high football IQ and is always thinking through solutions to formation and routes.”

Theodosopoulos nailed 22 of 23 extra-point attempts and 3 of 7 field goals, including a school-record 46 yarder. For his career, he converted 56 of 65 extra points and 6 of 15 field goal attempts.

“Payton is a player who has demonstrated what it means to be a consistent and strong kicker,” Brookings coach Brady Clark said. “Every game Payton kicks for us, our kickoff game has been strong and consistent, and we are very confident in his ability to kick long field goals.”